THE REAL COST OF PRISON COMIX 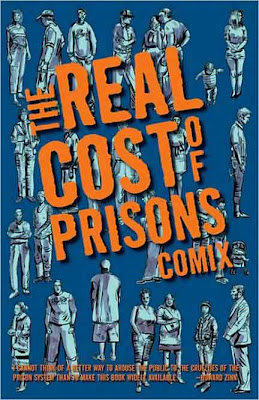 By Kevin Hodgson
Staff Writer
STORY REVIEW
THE REAL COST OF PRISON COMIX paints a bleak picture in which the real cost of prison is counted in human lives. This is a book with an agenda, but that agenda is never hidden. The editors, writers and illustrators want to change our prison system. The intent of this publication is to change public perception of the prison system in the United States by casting a light on the sad stories of prisoners, the conditions of these facilities and the politics that go into not only putting offenders behind bars, but also constructing these buildings all over the country. (There is a whole sequence that talks about how the federal government entices small communities to house prisons, only to realize later that there is little economic benefit to being such a host).
THE REAL COST OF PRISON COMIX is actually a collection of three smaller comic books put together by The Real Cost of Prisons Project and PM Press. This is not a book for young children; in fact, it may even be a bit harsh for some high school students. But it is an important book and by using the graphic novel format, the writers and illustrators make an emotional appeal to break the cycle of heartbreak for so many poor and minority citizens who, once put into confinement, rarely find a way back to a straight life.
The format also breathes life and breaks down the stereotypes of those who inhabit the cells of our jails. What makes this book even more valuable, however, is that this is more than a collection of stories. It also includes a narrative overview of the prison system in America, a reflection on the origins of THE REAL COST OF PRISON COMIX, written reactions from readers about the comics, and – most importantly, in my mind – suggestions for making improvements to the prison structure. In essence, this book details injustice and then goes the extra mile to lay out a social action agenda that could transform society by building a stronger social network for one-time and small-time offenders who are all too often coerced into committing worse crimes by their time in jail.
ART REVIEW
There are three books in this one collection, and three different artists (Kevin Pyle, Susan Willmarth and Sabrina Jones), but overall, the black and white artwork is powerfully drawn. The illustrators use a mix of traditional framed views with informative graphs, and the faces of those prisoners and family members profiled provide a real emotional depth to the writing. In one sequence, a storyline shows what happens to a 19-year-old black man and a 19-year-old white man when charged with similar crimes. By placing the two stories side by side, the reader traces the development and sees the sad fate of the world on the black man's face while the white man sits in counseling, looking somewhat bored. The use of black and white texturing is effective on many levels, including the clear symbolism of white versus black inequities that form the crux of these books' arguments when it comes to the unfairness of incarceration.
IN THE CLASSROOM
This collection has a place in the classroom, but I would advise teachers to think about it carefully. It is a political tome presented as a graphic novel, and as such, you would likely use it for older readers. Some of the storylines are troubling – dealing with drugs, HIV/AIDS and the awful reality of life in prison. However, the book also holds out great potential for discussion, research and social action on this important issue. Students could use this book as a catalyst for political d

ebate and for political action. It is collection of powerful stories based on real people, and how students react to those stories might provide for deep written reflections.
MORE INFORMATION
MY RECOMMENDATION
I would recommend this book for the classroom, but with some important reservations. This is not a book for elementary or middle school students, and a teacher should read the book first before bringing it into the high school classroom. The stories show a gritty reality, as drugs and alcohol and disease takes its toll on people's lives both in and out of the prison system. It is unflinching in this regard and so the book is not for the sensitive or faint-hearted. There is also some profanity in the dialogue in an effort to reflect the real language of the characters, which are mostly composites drawn from real stories.
Posted by Mr. Wilson at 7:26 PM