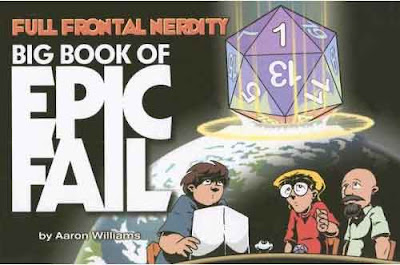 
REVIEW
What are nerds – and I mean dice-rolling, con-going, fantasy-reading, comic-discussing, parental cohabitating, card-carrying fanboys – really like in real life? Do you know any? Chances are they mill about in the hallways at school (or in your local comic or game shop) talking about paladins or dire badgers, fighting over who would be the eventual winner in a Superman-Batman fight, or harping on Hollywood’s latest comic-to-movie transgression. Truth be told, we can answer our “nerd” question simply by reading the back of FULL FRONTAL NERDITY:

“…it’s a comic strip about being fans of gaming, comics, movies, and other socially unacceptable things. We have Renaissance festivals, homebrew games, a trip to E3, and strips from Scrye magazine and Comics Buyer’s Guide. If you have no working knowledge about any topic covered in this collection, take it as a sign that you’re well-adjusted and will probably never find yourself dressed as a character from the Final Fantasy video game series, attending a con at the Boise Holiday Inn.”

FULL FRONTAL NERDITY is hilarity in the geekiest sense of the word and anyone who is the least bit of a fanboy will split his sides, but it is not really for everyone or even most people. Mostly it is about gaming, comics and movies with only the lightest sprinkling about girls. Most of those mentions are about female cup sizes and flawed attempts at cultivating relationships with the opposite sex.

In that sense, FULL FRONTAL NERDITY really isn’t for the school crowd. That is to say, it is not a book that I would recommend stocking on the classroom shelves. However, I would suggest it to those awkward high school boys who delight in role-playing and comics. They should not only get it, but love it, and likely thank you for the suggestion.

For those adult friends of yours who fit into the fanboy category, buy it for them (if they don’t already know about it, which they likely will). It will make their day. It made mine.