JACK AND THE BOX 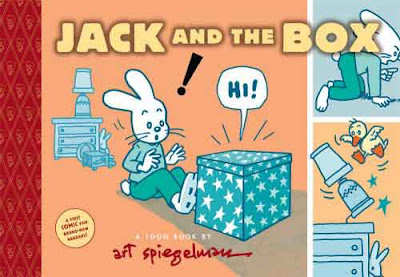 
STORY REVIEW
When I first found out that Pulitzer Prize winning comic creator Art Spiegelman started a comics company for primary aged children, I was ecstatic – couldn’t contain my excitement. Comics for little ones! He’s the perfect person to take such an undertaking because 1) he understands the importance of great storytelling and 2) he learned to read by looking at comics.

Spiegelman has known for years what we now know and many more are soon discovering: Comics are a powerful bridge to reading. When he was a young father he took some of his personal comics – quite valuable comics, I might add – and offered them at the alter of literacy so that his own children could learn to love reading and literature as much as did.

Along came JACK AND THE BOX, a tiny tale about a rabbit and his new toy – a Jack-in-the-box. There are at three things I can think of that are designed for children but are rather terrifying, at least at first: clowns, sock monkeys and a Jack-in-the-box. Spiegelman is aware of at least one of those fears.

Our curious rabbit, Jack, is a typical child. He wants to play, but that darn toy refuses to come out. Then, all of a sudden, it pops out catching Jack unawares. It’s all in good fun and Jack laughs after being scared a few times.

The back-and-forth of Jack the rabbit and Zack the toy is classic childhood. Play-pretend and reality get a bit muddled, and when Zack introduces a toy of his own, things get quite out of control. Isn’t that the way it always is with kids?

Ah yes, JACK AND THE BOX is a pleasant surprise for me as well as for kids. The delightful interplay between the boy and his toy is dynamite. Spiegelman knows his audience well, giving them an outside-looking-in perspective of a child with a new toy.

JACK AND THE BOX springs to life and gives the young reader a book to care about, enjoy, reread, and pass along to his or her own children.


IN THE CLASSROOM
Toon Books continues to publish spot-on comics for primary readers that can be used in as many ways as traditional books. Comics, however, are especially and uniquely created for paired read-alouds. Not only does such an activity support shared reading experiences, but also promotes a sense of community and the sharing of stories among peers.

Click here for the lesson plans developed by the publisher.

One of my students, an 11-year-old boy who was just beginning to decode words, fell in love with this book and read it several times every day for a week. I asked him why he liked it so much and he gave a big grin and said, "Because I can read it!"