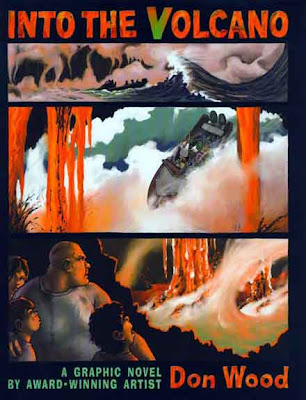 
STORY REVIEW
INTO THE VOLCANO is about danger and adventure, as two brothers – Sumo and Duffy – get trapped inside an erupting volcano, and Don Wood's first foray into the world of graphic novels works on many levels. Wood, a picture book artist who often pairs up with his wife Audrey, explains in the liner notes that the inspiration for this story comes from living in a tropical jungle not far from active volcanoes.

Wood spent seven years working on this graphic novel and it shows through his vibrant illustrations and rich story lines. The book centers on Sumo and Duffy, whose aunt has summoned them to their mother's birthplace, the island of Kocalaha, only to be sent forth on a mysterious journey with their brawny cousin and a ragged crew that leads them straight into the heart of a volcano that is about to erupt. The reason for the mission unfolds slowly – it has to do with their mother and her work discovering some magical stones in the volcano – and when the boys realize they are being deceived, they break out on their own. When one brother gets seriously hurt in a fall down a cavern, the other must find a way to save him. INTO THE VOLCANO then becomes a story of survival, brotherhood and courage as the boys travel through lava tubes in order to escape, only to find their mother in the heart of the mountain.


ART REVIEW
As you might expect from an artist of Wood's caliber – he has won many awards for his work with picture books – INTO THE VOLCANO is a visual delight. Wood captures both the wonder and dangers of the tropical rain forest as well as the claustrophobia the boys feel as they are trapped inside the volcano.

My criticism is that I wish Wood had done more to differentiate the faces of the two brothers – Sumo and Duffy – as I sometimes found myself wondering who I was looking at. I also think that Wood could have done even better with the characterization of Sumo and Duffy, allowing us to see them more as individuals who grow through the adversity, instead of a pair of brothers perceived almost as one. I admit that I had sometimes had to stop myself and wonder, “which brother is this?” And given that this is essentially a story of brothers, that distinction seemed important to me.


IN THE CLASSROOM
This book delves into the themes of family ties, greed, and internal strength in the face of death and danger. As such, it would make a good companion book to the adventure story genre that is popular in elementary and middle school classrooms. From a writing standpoint, students could make a map of the volcano paths taken by Sumo and Duffy, and then after some research on volcanoes, write their own story set within a volcano.


MORE INFORMATION
MY RECOMMENDATION
I would highly recommend INTO THE VOLCANO for upper elementary through high school classrooms. I think it has enough variety of content to capture the imagination of most students. There is no profanity or violence, although some of the scenes in which the boys are in danger are somewhat visually harrowing.

My school librarian purchased this title on her own (that is, without my suggestion), and I couldn't be happier. A great connection between the unit on volcanoes that the seventh graders study in science and the comics medium we study in my class.

Keep in mind that Capstone Press has a graphic novel on Volcanoes. You can find it by using this link:

I know it's long. Sorry. Cut and paste that into your browser. It's also available with an Interactive CD, which would be really cool, too.