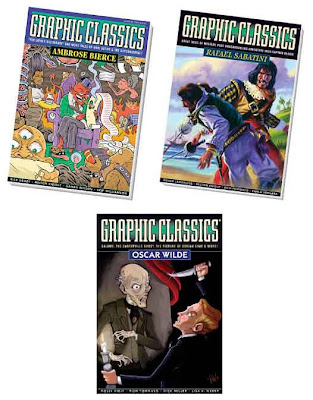 My first exposure to classic literature was a Star Trek comic that had Captain Kirk and his crew somehow tracing the journey of Odysseus as he tried to make it back home to Penelope. I’m sure Penelope was some green-skinned alien. I still remember the changing contours of Kirk’s face as he was tied to the mast of the ship so that he could hear the Sirens’ song without going looney and crashing the ship. Whenever I teach the Odyssey I have to constantly remind myself there are no Prime Directives, phasers or Vulcan mind melds involved.

When I read THE GRAPHIC CLASSICS series, they seem to be made for the classroom. The series is a set of graphic novels of classic adventure stories – Poe, Stevenson, London, Conan Doyle – with a swarm of adapters and artists. For instance, the Ambrose Bierce volume gathers together 31 artists and writers in only 137 pages to take their shots at the misanthropic genius’s work (the Oscar Wilde volume is more leisurely – only five much longer sections). There are pages from “The Devil’s Dictionary” as well as from much more obscure pieces such as “Moxon’s Master.” That seems a natural approach to take as it would be impossible to amass the number of volumes the series contains (17 volumes and counting!) by employing one artist/writer team.

Furthermore, you can see the rationale behind the series. Imagine a reading-resistant boy (and the vast majority of these volumes are boy-centric, though a volume of Louisa May Alcott is due out soon) being given one of these graphic novels and it’s not impossible to imagine that he might find something engaging about these stories as they are illustrated. Yes, something is lost in some of the stories as they get simplified, but it’s also hard to imagine some of my students being willing to sit down with “The Picture of Dorian Gray” or even “Captain Blood.” We live in a visual society and it may be that out literature classes will need to accommodate that somewhat.

The problems I have with the Graphic Classics series is not the dumbing down of literature but the havoc that is wreaked with the constantly shifting succession of artists. Some of this art is absolutely stunning: Bierce’s “Oil of Dog” is illustrated by Annie Owens who captures the creepy strangeness of the tail with deft lines. I wish I could have read the entire volume with her work.

Other artists either have styles that simply don’t match up well with the material or are honestly not very good. The mishmash of styles and approaches adds up to volumes that lack any possibility of unity. The books practically force you to thumb through them rather than read them cover-to-cover. Therefore, it might make sense to have copies of these books in your library to pull down for Silent Sustained Reading periods, but the idea of buying a class set and trying to teach with them seems difficult to imagine.

Still, they are reasonably inexpensive (10$ each!) and each volume contains gems as well as groaners. What I want, no doubt, is implausible. I’d love to see classic works that are translated by talented artists into works that maintain a sustained vision throughout the piece (see Peter Kuper’s THE METAMORPHOSIS). I want to be able to reach out to the student who has no reason to believe that literature has any value to him, but beyond bamboozling him with pretty pictures, I want to introduce him to the possibilities that literature embodies and imagine that—in time—he’ll also want to pick up the original … even without the art.


MY RECOMMENDATION:
Appropriate for Middle School and High School