DETAILS ON THE NEW BONE TITLES

On his Boneville website, Jeff Smith has posted more information about the upcoming additions to the BONE world. BONE: TALL TALES will be a collection of full-color comics written by Smith and Tom Snigoski. 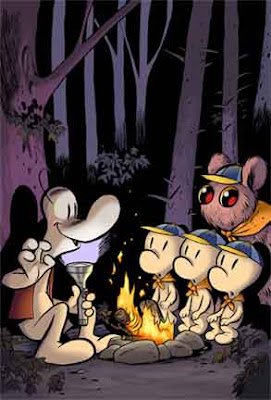 BONE: TALL TALES will be the next graphic novel in the series.
According to the website: "This new book, which takes place after the Bones have returned to Boneville, revolves around Smiley and Bartleby telling tales around a campfire to a group of young Bone Scouts (their names are Ringo, Bingo, & Todd!)."

Several of the stories will be a repackaging of previous black and white work from STUPID, STUPID, RAT TAILS and Disney Adventures magazine, all colored for this book. There will be new stories as well; Smiley and Bartleby stories will be written by Smith, and “Johnson Bone, Frontier Hero” stories by Snigoski. BONE: TALL TALES is scheduled for release in the summer of 2010.

BONE: QUEST FOR THE SPARK is something entirely new – a series of three prose novels, written by Snigoski and illustrated by Smith. The stories will “follow a new generation of Bone characters into the Valley.” 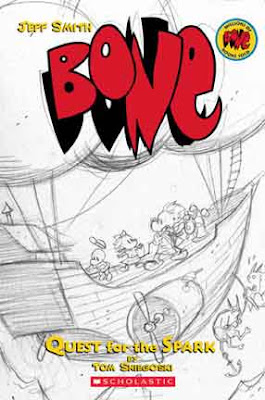 BONE: QUEST FOR THE SPARK will be a series of
prose novels with illustrations rather than graphic novels.
Said Smith:

"I was a bit unsure about this project when Tom first suggested it, but when I read the first book I laughed so hard, I agreed to do it. Scholastic was so blown away by it, that they decided to make it available in hardcover and wanted the illustrations, of which I think I’m going to do about twenty, full bleed and in color."

The first volume of QUEST FOR THE SPARK will be released in 2011.