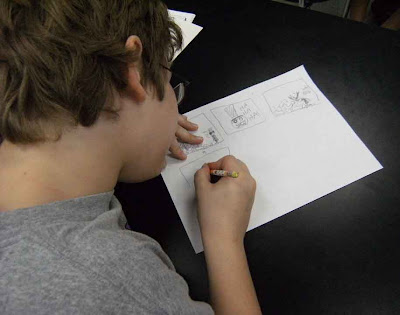 It's no secret that I love comics.

I make them (Boolean Squared). I use them in the classroom as both supplements to literature and as writing activities. I read comics regularly in book form and in my daily newspaper (and I still wish Bill Watterson was making Calvin and Hobbes). I watch my own children write comics on their own for long stretches of time with no help from me. And I truly believe the art of comic form can engage some learners (not all) on a very different level than prose or poetry can. There's something about the combination of art and words that seems to have a magic all of its own.

So, I took the plunge this summer and decided to offer up a four-day camp for middle school students who might be interested in creating comics for four hours each day. The idea first came during this year's 24 Hour ComicS Day event, when my son and I went to the local comic book store only to find the place mobbed with young writers sitting all over the place writing and composing quietly and with full focus. That scene blew me away. I knew that few of their teachers probably saw in the classroom what I was seeing in the comic book store.

Even so, I had no idea if the camp – to be run jointly by a local high school and the Western Massachusetts Writing Project – would get enough kids to make it viable. But it filled up quick and there was even a short waiting list, so I guess I was on to something. I teach sixth grade during the year and this was the third summer in a row that I taught a claymation/animation camp for middle school kids, so it wasn't completely unknown terrain for me.

Still, I struggled with how to provide some instruction while leaving enough space for kids to create what they wanted to create.

The camp was therefore a combination of how to do some things (such as how to use ComicLife software or how to use our closed comic networking space set up through ToonDoo), helping the 16 young comic writers figure out what they wanted to do, bringing in a few guests (such as Hilary Price, who does the syndicated Rhymes with Orange comic) and then letting them do what they wanted to do. In my heart, I knew what they needed most was a supportive place to create. It was wonderful to watch and my co-teacher, Tom Fanning – who had never ventured into the world of comics before – was hard at work on his own comic projects and engaging kids with an outsider's eye.

We had graphic stories developing page by page, including one that was inspired by anime and manga-style comics. We had character-driven comic strips, such as Unlucky Joe who just could not seem to get a break. We had a series of comics built around a prop (a blue alien slug). Two students collaborated on a series of comics about The Old Man whose memory was, well, sort of faulty and got him into strange situations. And we even had a spy mystery story that unfolded one comic strip at a time with hopes of reaching 100 pages in an ebook format. These were motivated writers and they milled about, sharing their ideas and comics with each other with very little trepidation. We heard a lot of a laughing and a lot of supportive comments. This group was mostly boys (14 of them) and how often do you have boys coming in willingly to write for four hours every day for four days? Did I already mention the magic of comic books?

We did spend time on the first day of camp reading through the many graphic novels that I now own and talking about what makes a comic strip different than a graphic novel, and we also chatted about the genre of comics and how they integrate the visual into the story. Terms such as speech bubbles and text boxes joined the unknown concept of emanata in the lexicon of the young writers.

In my conversations with them, I tried to make clear to them that their art was valued here and even if their own teachers did not always see the merit in the work they were doing, they should have faith in it and continue with their passion.

If you are a teacher reading this post, please encourage the comic artists in your classroom and find ways to bring their talents to the forefront. Many of these students were already feeling marginalized in their classrooms by their teachers, who saw their work as scribblings in the margins of papers. We owe it to them to encourage them as writers, no matter the genre.

You can view some of the work of the students and visitors (plus the collection of Claymation Movies from the morning session) at our weblog Clay Comics.

What a great camp! Do you think something like this could be done in a lunch option for kids during the day or was having 4 hour blocks of time critical?

Good question, Franki. I think this idea could definitely work in smaller chunks of time. The long blocks were just part of the camp structure. Email me if you want a copy of the basic Comic Camp curriculum that we used.

Great to read your reflection here, Kevin. I have graphic novel on ballet to give to you and info on how you can request a tour of private collection of comic books at The Children's Literature Center, part of the Library of Congress, in DC. How cool is that! www.loc.gov/rr/child
Susan