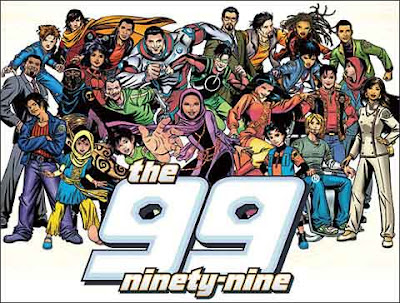 
STORY SYNOPSIS
Thousands of years ago the city of Baghdad housed the world’s greatest collections of knowledge – tomes of great importance. In 1258 A.D. the keepers of the knowledge known as the Caliph – aware an attack was imminent – prepared a magical concoction, the King’s Water, and transferred the knowledge of the great libraries into the 99 Noor Stones. The stones were scattered and while the books were destroyed, the knowledge remained intact within the gems.

The stones were later used to construct a magnificent dome upon a great fortress from which all knowledge could be gained when the light was right. This time a special council was put in place to protect the knowledge. In 1420 A.D. a boy, Rughal, was born to one of the guardians of the temple, a boy who would seek unnatural power and knowledge through violence. Once again the Noor Stones and the wisdom within was in danger. Rughal’s attempt to extract the scholarship led to the destruction of the temple, his own disappearance, and the scattering of the Noor Stones.

Today, psychologist and historian Dr. Ramzi Razem is working tirelessly to find the 99 Noor Stones and the unsuspecting 99 individuals who can wield the qualities of the individual stones and bring peace and prosperity to the world. Dr. Razem is juxtaposed with the infamous Ruhgal, who still mysteriously exists, and seeks complete domination and power using the stones and the people connected to them.


STORY REVIEW
My first concern about THE 99 was that it might be religious conversion propaganda rather than good superhero story. What I realized after reading seven issues – and what I want to make clear – is that THE 99 is no more religious pamphlet peddling than is the highly celebrated Christian-influenced fiction of THE LORD OF THE RINGS and THE CHRONICLES OF NARNIA.

Instead, series creator Dr. Naif Al-Mutawa has done what J.R.R. Tolkien and C.S. Lewis did; he infused his religious and cultural heritage into a high quality fictional storyline that tells an excellent and exciting story without preaching or even mentioning the name of God or the name of any specific religion.

The characters are diverse in gender, ethnicity and disability; their religious proclivities are not known or discussed. However, each character’s power and superhero name is connected to the 99 names of Allah, which happen to represent properties inherent in many religions and cultural beliefs. According to Wikipedia, the following characters have been introduced in the series to date (although I’ve only read about five so far):

Jabbar, The Powerful
Noora, The Light
Darr, The Afflicter
Jami, The Assembler
Widad, The Loving
Fattah, The Opener
Mumita, The Destroyer
Raqib, The Watcher
Bari, The Healer
Sami, The Listener
Musawwira, The Organizer
Hadya, The Guide
Rafie, The Lifter
Baqi, The Everlasting
Baeth, The Sender


These characteristics are not specific to any religion or cultural belief and are, in fact, present in many of our American superheroes, Greek mythology and other characters in great literature. The spellings simply reflect a certain cultural heritage.

During the reading I made two connections: text-to-text and text-to-world. While reading about these superheroes and the struggles between the leaders of the two factions (Dr. Ramzi Razem for the good team and Rahgal for the bad) I thought about the struggles of THE X-MEN (text-to-text) and the oft-made analogy between Dr. Martin Luther King, Jr. and Malcolm X (text-to-world).

For those who may be unaware, THE X-MEN has addressed many social issues such as anti-Semitism, civil rights and religious fanaticism. The series has been seen as allegorical to the racial unrest in the 1960s. Professor X (leader of the X-Men) is representative of Dr. King, and Magneto (leader of the Brotherhood of Mutants) is compared to Malcolm X. Both seek a world where mutants can live free, but both have drastically different approaches to the problem. Professor X seeks a peaceful and collaborative union with humans, while Magneto chooses a turbulent and violent overthrow of non-mutant humanity to ensure peace for himself and his people.

THE 99 seems reminiscent of that social discussion, updated to represent the problems and chaos of the 21st century by using the Middle Eastern community as a springboard to talk about peace and unity for all persons regardless of background. It does so with a strong eye to rich storylines.

I would prefer that the old stereotype of the angry disabled person not be perpetuated. The one character using a wheelchair is portrayed as angry and unable to go out because of his wheelchair. That simply is not a reality for persons with disabilities. I think the creative team should work harder to be more sensitive to the disability community. On the other hand, women have been given powerful leadership roles and are not relegated to traditional Islamic roles or dress.


CHRIS’ RECOMMENDATION:
Highly Recommended
Dr. Al-Mutawa has developed an outstanding series that is culturally relevant and deeply engaging. To boot, it is also gender-supportive. The cultural nuances of the story, along with the positive female role models, make THE 99 a perfect addition to the classroom.

The narrative is ripe for explorations of the myriad of social issues affecting today’s citizen. I think the complexity of the story make it best suited beginning with 10-year-old students; however, I think young students will miss a lot. Middle school and high school students will benefit the most from the rich narrative.


OTHER INFORMATION
DC and Teshkeel comics are planning a collaborative effort where Batman, Superman and Wonder Woman will meet up with THE 99. Click here to read the ICV2 article.

Can you tell me where I can find these comics?

Great question. You can get them digitally from the publisher. http://www.the99.org/. Hard copies are a little harder to come by, but be patient. With the publisher's joining forces, I suspect we will see some trade paperbacks and other issues back on shelves.