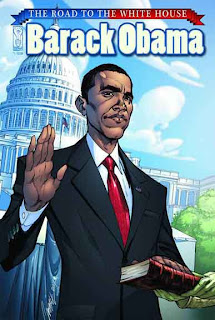 The election, the inauguration and President Obama’s first 100 days in office are the next set of comics planned by IDW. The comic publisher was the first to comicize Obama and presidential contender John McCain during the 2008 election although others have since followed suit. Newsarama conducted an interview with writer Jeff Mariotte.

Read our previous coverage of the presidential comics here and here.