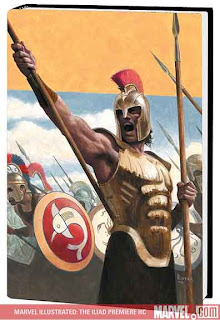 
STORY SYNOPSIS
During a trip, the Trojan Prince Paris made off with Helen, the wife of Menelaus a Greek. Menelaus turned to his brother Agamemnon the King of Mycenae to enact retribution against the City of Troy and regain Helen. What transpired was a 10-year war, a small portion of which is detailed in The ILIAD. A war with kings and princes is enough, but when the gods and goddess join the fray, the bloodletting and the treachery is wet and red.


REVIEW
Who knew that a 3,000-year-old epic poem supposedly by a blind Greek poet would have such standing and influence on Western literature and philosophy? THE ILIAD has withstood the years, enduring numerous translations and adaptations, giving way to its title as the greatest war story ever told. The 15,000 lines of poetic verse have been a staple of the literary canon for years and its description of the human condition is as relevant now as it was it was written.

Roy Thomas’ adaptation is just one more incarnation of the great war story, one that presents itself to the 21st century student in a way that makes sense to the reader and revitalizes the old verse. Thomas chose to keep the archaic feel of the language intact to preserve the richness of the original and to set the tone. While that language is a bit tedious and confusing at times, it maintains the ancient and authentic feel of the story. The read is not easy and requires some dedication on the part of the reader, but the result is worth it.

Marvel Illustrated helps the reader by providing explanations in the text and a glossary in the back. The gods and goddesses and their words are colorized and textually different from the rest of the story, allowing the reader to discern the immortals from the mortals. The author’s word choice is more in line with the setting and the story, but it does cause above-average difficulty. From the dialogue, to the narration, to the guttural screams and war cries, the authenticity of the adaptation was strong beginning to end.

The only exception was the “Hii-Yaaaaaa” by Idomeneus, King of Crete, when he brought down his wrath against the Trojans. That brief diversion from the tone of the rest of the book was distracting and pulled the reader from the story; however, that detail is minor and rather insignificant.


ART REVIEW
The depiction of the armor alone is distinct and worthwhile your time. So many groups are in battle, yet Sepulveda takes time with each handcrafted piece. The artist is not afraid of battle scenes, giving us a sometimes disgusting but accurate view of the brutality and burning. The infusion of gods and goddess can be distracting, but Sepulveda finds a way to incorporate their characters and dialogue bubbles so that the reader can easily discern between mortal and god.

THE ILIAD is a classic tale full of dread, death, war, and love. There are blood-drenched epic battles, treachery, and abandonment. The complexity of the story is best for high school students, but that should not be interpreted to preclude younger students. Great caution must be exercised when presenting this story to younger persons as it is difficult and will likely require scaffolding. It could be that some younger but gifted students may do well with such a tale. Those kinds of decisions should be taken on a case-by-case basis.


BE AWARE
It’s the greatest war story ever told. Swords are wielded; gods and goddesses are prayed to; death is dealt; blood flows freely; and love and abandonment are central to the story.


IN THE CLASSROOM
Using a comic adaptation of a traditional work in an English classroom is not a popular choice and upsets many educators. While I argue that the comic adaptation may be very appropriate depending on the class and the students, it is important to note that an educator need not choose one over the other, when using both is a legitimate and contemporary option.

The combination of studying the original and the adaptation may be a powerful way to engage students and increase reading motivation. The original text could be used to develop appreciation for the beauty of the original verse and the epic nature of the work, as well as to fill in gaps left out of the adaptation. The comic version can be used for comprehension and visualization of the story; it can build the foundation from which the original text can be studied and really enjoyed. Together, I believe that the two works will create a unique and contemporary literature class that can emphasize understanding and appreciation and bring the literature to the students.

I offer several suggestions the reader may find helpful:

OTHER INFORMATION
While THE ILIAD and THE ODYSSEY are generally cited as the works of a blind poet named Homer, scholars are unsure if Homer was a real person, or an amalgam of multiple writers.


CHRIS’ RECOMMENDATION:
Highly Recommended
Be it classic interpretation or graphic adaptation, THE ILIAD is one of our oldest and most influential works. It is a classic regardless of the format. Marvel Illustrated’s comic adaptation is a must-have.