ARCHIE'S WAR: MY SCRAPBOOK OF THE FIRST WORLD WAR 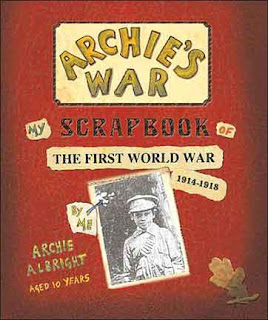 
STORY REVIEW
Sometimes a trip to the library can yield such wonderful results. Such was the case one wintry day as I took my sons to our local library and found among the stacks of new books an over-sized tome entitled ARCHIE'S WAR: MY SCRAPBOOK OF THE FIRST WORLD WAR by Marcia Williams. I admit that it was the dark mahogany cover that first drew my attention. But turning to the inside of the book I was hooked. Building on the model of the DRAGONOLOGY and MONSTEROLOGY books that use fictional documents, fake archeological finds and other tidbits to tell a tale, ARCHIE'S WAR uses the hand-drawn comics of a fictionalized 10-year-old Archie Albright to tell the story of living in England during World War I from 1914-1918.

It's difficult to explain the set-up (this is one of those books that you have to read to experience), but the mixture of comic strips, notes in the margins, letters from relatives on the front lines, photographs and hilarious comic-book-like characters that inhabit this book draws the reader into the experience of a country under siege from the German airplanes. It is a story about loss and perseverance, and also, of growing up.

Archie has a lot to learn about life and he records these moments, as best as he can, with a graphic interpretation of the world crumbling around him. He loses an uncle, has his older brother severely injured, and doesn't hear from his father for months at a time while he is stationed on the front. His friend, Tom, has his house and neighborhood bombed, and Archie rushes there to find and help his friend and his family as they wander about shell-shocked after the explosion. At one point, Archie writes, "At first, being at war was like being in a comic strip. It ain't like that now – it's REAL." Making it even more real is the timeline of the entire war that Archie scribbles in the margins as history marches onward while Archie and his family try to survive. The scrapbook format with comics works so well here that you forget that Archie is a fictionalized character. That is the beauty of this gem of a book.


ART REVIEW
The art is a mishmash of scrapbook images and comic strips that reflect the style of a 10-year-old artist. The art allows the reader to view this chaotic world through the eyes of a child, and the adolescent humor is evident in so many of the pictures. Essentially, this book is a feast for the eyes and one could read this book on many levels, thanks in part to the art. 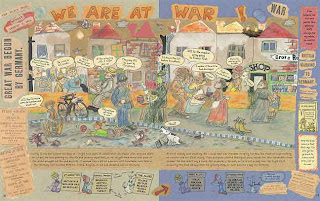 IN THE CLASSROOM
With so much attention paid to World War II in our culture, the grim realities of the first World War often get lost, but this book brings it all into focus through the eyes of a child. As a companion to textbooks in history classes, this book could be a fictional archive of that time period and show what life was like in a country moving into and experiencing the tumult of war.

From a reading and writing perspective, this book just screams "point of view" and could provide a wonderful platform for examining character development. We watch Archie move away from his innocent beginnings and he is guilty of bad judgment, too, such as the time he shouts down and excludes a former friend whose family is from Germany. It would be well worth examining the parallels between that experience and the internment of the Japanese in the United States during World War II and the treatment of Arabic/Middle Eastern citizens in the aftermath of 9/11.

The scrapbook technique for telling a story might also open up some creative doors for young writers, who could piece together a story narrative in a less linear form than prose writing. The addition of comics also opens up the door for artwork, too.


MY RECOMMENDATION
I would highly recommend this book for middle and high school classrooms, as well as upper elementary. It is an engaging fictionalized historical piece of work that uses the comic strip art to full effect. There is no profanity or objectionable material in this book.

This is very educational and the whole blog as well. I will be recommending this to my friends and by the way where can I find a paper copy of this thing here?!

The horrors of men's greed!

A good book, reveals the strength of men at tough times and the evils (we) possess.