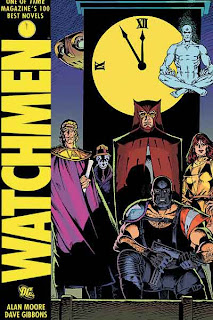 
REVIEW
When I originally picked up WATCHMEN in the late 1990s, I was brand new to comics. At that time, I had just discovered the powerful nature of comic literature and I was buying titles left and right, devouring all kinds of tales – mostly non-superhero stories from independent publishers. My appreciation for story and art was very limited and specific. When I thumbed through Alan Moore’s groundbreaking graphic novel and saw the strange color palette, I handed it back to the friend who loaned it to me, despite hearing the accolades. Thanks but no thanks. I’ll stick to ….

Now for those of you who have nurtured a long, deep love affair with WATCHMEN, please be patient. I did – a few years later – buy my own copy and read it, but only after I was able to expand my definition of comic art. I now hold WATCHMEN in the highest regard.

The time between handing the book back to my friend and the time I picked it up again was well spent. WATCHMEN is not really a neophyte’s friend, at least in most cases it is better to work one’s way up to WATCHMEN. The nuances of the story and art are so complex, so deep, so rich in detail that a new comic reader will undoubtedly miss too much. It’s easy to do. WATCHMEN is not a book to be read only once. Doing so would render the experience too superficial to be considered an authentic experience in the first place. That fact is one thing that makes WATCHMEN the valued tale it is.


BE AWARE
Moore threw the kitchen sink at the book when it came to controversy. Sex, rape, nudity, murder, graphic violence, homosexuality, prostitution, animal cruelty: it is all there and more. WATCHMEN is not for the sensitive, not for the meek, and not for children.


IN THE CLASSROOM
I’ve heard rumors of high school teachers using WATCHMEN in the classroom, but I can tell you that I do not think that would be appropriate in most classrooms or communities. Certainly it should be reserved only for advanced students. I agree with TGC Staff Writer Nate Stearns when he suggests that parents give written consent in order for high school students to study WATCHMEN. For the most part, this book is school appropriate only with college students.

Moving beyond the debate of how old one should be to study WATCHMEN in school, there is the issue of what to teach. My first thought is that a teacher would want to take his time guiding students in studying the story and the art. At every turn, Moore and Gibbons throw so much into every panel that the reader must move slowly and cautiously to avoid missing too much. Even then, there are things to be lost. I also think we need to be comfortable with absorbing WATCHMEN in smaller chunks.

As a teacher, I think I would spend a significant amount of time helping students make sense of the allegory of the TALES OF THE BLACK FREIGHTER. This is a comic-within-a-comic, that is read by the teen who sits next to the street-side newspaper salesman.

The tale is one of a shipmate who is the lone survivor of a pirate attack by the Black Freighter and her crew. He decides he must warn his family and community of the impending doom sailing their way, and so he fashions a raft from the corpses of his dead mates. His trek requires him to continue to compromise himself and commit unspeakable acts in order to save the life of his family.

At first, THE BLACK FREIGHTER interrupted the flow of the main story and was problematic to me, which is why I suspect they may have left it out of the movie. Be that as it may, THE BLACK FREIGHTER is an important allegory to Moore’s overarching theme and should be read and studied. I think that knowledge will help students accept the minor interruptions to the main plot and view the FREIGHTER as another depth to which Moore will go to create levels in his works.

I wonder if students would gain more from WATCHMEN if they first read, studied and understood FREIGHTER, then went back to read the entire story? I suspect it might head off some complaints that FREIGHTER was confusing, strange, or unconnected to the rest of the story. It is not, but I have heard many a comic fan pan the allegory. Perhaps, it might help them make sense of WATCHMEN and even make predictions to the ending.

I suggest that the teacher help students study each scene and panel, reading each newspaper, flier, billboard, and protest sign. There are many hidden treasures stuffed in the panels that a first time reader will easily miss.

It might also be helpful, before ever starting WATCHMEN, to lead students in a quick lesson or two on the politics of the time, the people in power, and the impact of the Cold War on every citizen. To understand the time period is to understand the drive of the book and the alternate reality that Moore has created. The politics is what drives the characters to do what they do.

There is so much to teach and study in the WATCHMEN. It is brilliant and contemporary, difficult and surprising, stunning and brutal. It gives the reader plenty to think and talk about.


OTHER INFORMATION
WATCHMEN won an Eisner Award, a Hugo Award, and is now a major motion picture. This version of the book was recolored. Click here to read the first chapter.


CHRIS’ RECOMMENDATION:
Highly Recommended
WATCHMEN was not an instant love of mine. It has taken time for the appreciation, admiration, and love to grow, but prosper it has. This is a book that is worthy of the praise it has received.

Thanks for your thoughts on teaching the book! I've often thought how I'd teach the whole thing. Currently, I use the chapters from "Under the Hood" in my Freshman Comp. II class as a transition between the superhero comics/stories and the autobiographic comics we read.

It's interesting that you felt "The Tales of the Black Freighter" broke the flow of the story. I've been hearing that a lot lately. Maybe I'm ADD, but it really worked for me, and it's one of my favorite parts :-)

I am currently working towards my masters in teaching. One of my final projects is to compile a list of activities for students to do-- basically, a brief lesson plan. I was wandering around the internet looking for a way to incorporate the Watchmen into my lessons.. just wanted to thank you for the help! I will definitely bookmark this page and return later. Thanks! :)