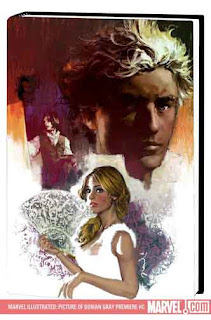 
For all the demand from well-meaning teachers and librarians, there is – at least by any active graphic reader – a stigma on classic adaptations. In the shadow of award-winning, poignant originals, classics squeezed into this medium – for all their literary merit – are often hollow. And, in me, a nigh hypocritical conflict of interests: I read and have read graphics for many years, I challenge any great novelist to stand against a storyteller like Warren Ellis or Mike Carey. At the same time, I'm a Librarian with an English degree and a Victorian Studies penchant, and if there be just the one way to get teens a white whale, then I'll give-over my thirty pieces to an industry who I think take advantage of an ever-more-popular, once cult, medium.

So I added to my YA Collection the Marvel Illustrated Oscar Wilde. Adapter Roy Thomas admitted in his foreword that Wilde's sort of lengthy rhetoric doesn't necessarily lend itself to illustration, but it turned out okay. The story of THE PICTURE OF DORIAN GRAY is one of Victorian dandy-aristocracy and a fat, ironic guffaw at sensibility and beauty-this and beauty-that, wherein our hero swaps his soul for the surface ever-youth of his own portrait. It's dangerous and it's dark and appropriate for Halloween.

Sebastian "Melmoth" Fiumara's art is rich and colorful; sharp expressions and fully-painted panels give to the graphic a sense of period realism that can kinda-sorta attune to nineteenth-centuryishness. Memory and recall are distinguished from present action in sepia, daguerreotype-like light; imagination is a slur of a red-tinted scene behind the full-color present tableau, which reinforces the multidimensional quality of a story with the swish of a brush. And his painting of Dorian's portrait itself is pretty suave, IMHO.

To Roy Thomas and the letterer Dave Sharpe's credit, much of Wilde's own words make it into the narrative boxes and dialogue-bubbles without crowding-out the pictures. And while most of the story is narrated in this way, it never seems like it is word-heavy. In fact, because a lot of DORIAN GRAY is philosophical, Roy Thomas manages to express a lot of this visually rather than copy-and-pasting paragraphs of the book. The following's from the forward:

For the most part [these] had to be omitted. But then, this was an adaptation, not a reprinting of the work itself, which was readily available elsewhere. Comics and graphic novels, like films and television, lend themselves most readily to telling the story, and there was plenty of story to tell, even in a relatively brief novel.

A lot of the story is introspective, but Fiumara pays as much attention to the internal landscape of DORIAN GRAY as his dashing and foppish exterior. Dorian never ages; but somehow, the vain and fragile youth becomes conflicted and mature by the end of the comic without any readily noticeable changes to his mockup.

I am pretty awe-struck by the ever-present push to smother younger and younger students with canon literature. When Mark Twain isn't on the ban-list down here, he is being read to middle-schoolers. I bring this analogy up because part of the reason these authors made it to canon is because they often portray something seedy about humanity, even when all in good fun. So while THE PICTURE OF DORIAN GRAY and suchlike are adapted into graphics to be sold to younger students – which sounds super marketable – I don't know whether the publishers take into account how dark these stories can be, and how unlikely they are to be taught as comics in the classroom.

Here's the thing: the adapted Dorian Gray is really remarkable, but having the real horror of Dorian's world brought from a monochromatic page to striking visuals – pertaining to suicide and murder (and the disposal of the body) – makes it awful poignant. I'm all for relentless gore and I generally root for the bad guy, but there is a panel in which a man hangs himself simply because he once associated with Dorian Gray, and it caught me off guard. It's not particularly artful and it's not like he's disemboweled, but it is pretty sad.


AGE RECOMMENDATION
My Rating: High School
So because the adaptation can do this, I wholly recommend it for High Schoolers: there's a LOT that doesn't make it from the novel, so it ain't a substitute, but what it doesn't omit it nails (even the boring parts of the novel are boring in panels – which, trust me, is probably how it should be). Were it my lecture, I would likely supplement the novel with Fiumara's art on the big screen, as I don't see - even though the adaptation is good - there being much demand for the novel after the graphic (that'd be a feat!, IMHO), but it is most certainly worthy as an aside. I can't imagine talking Dorian Gray again without Fiumara’s panels, which I will definitely do if it ever came up again.


MICHAEL’S RECOMMENDATION
Recommended with Reservations
THE PICTURE OF DORIAN GRAY is a good horror show, but there is enough to keep it out of the hands of someone easily moved. It's not scary; you're not going to go EEEEEEEEE! after Dorian does something Dorianish, and you'll definitely be able to sleep (it might put you to sleep!), but it is pretty dark. There is a lot of underbelly truth to this supernatural soul-selling stuff, and it's best to be prepared for it.