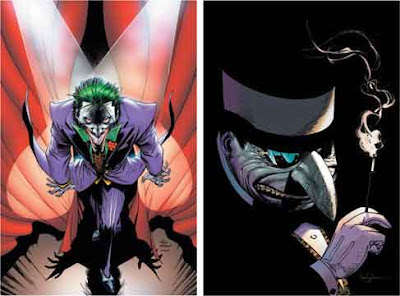 
STORY SYNOPSIS
The five stories in the series, all narrated by The Joker, center around one of the super villains in the Batman continuum. They were originally released one per week for five weeks, each with a different writer and artist.

Joker’s Asylum: The Joker
Written by Arvid Nelson
Art by Alex Sancez
Cover by Andy kubert
In “The Joker’s Wild” we are privy to one of the clown prince’s little pranks, with a moral. The Joker presents us with a life scenario, a wicked one, and lets life unfold spontaneously, opening up the underbelly of corporate greed for all to see.

Joker’s Asylum: The Penguin
Written by Jason Aaron
Art & cover by Jason Pearson
In “He Who Laughs Last” the Joker tells a tale of pain and woe, of love and pranks, a story that leads one short penguin to denounce true love. In high school, Oswald Cobblepot fell prey to a joke at his heart’s expense, when he received a fake love letter from Allison. Flowers fall, hearts break and the young Oswald is exposed, hurt and vulnerable, pitiful. Fast forward and we find the Penguin surrounded by sycophantic bar flies drunk on his power. When he frees a woman from bondage, her love is pure, transforming him. That is, until she discovers his dark, vengeful side and his lust for revenge.

Joker’s Asylum: Poison Ivy
Written by J.T. Krul
Art & cover by Guillem March
Poison Ivy, who was an experiment gone awry, gets revenge on everyone involved in the erection of the new luxury estates and more importantly, the destruction of the wildlife in the woodlands that once stood in its spot in this story titled “Deflowered”. Carefully, calculatingly, she plots the death of all the entrepreneurs involved. It takes Batman’s keen intellect to figure out the pattern and put a stop to deathly plans.

Joker’s Asylum: Scarecrow
Written by Joe Harris
Art & cover by Juan Doe
A group of teens get together for a more sexually advanced twist on spin-the-bottle. The boy pulls a name from the pot, and then he and the lucky girl go upstairs for a quick, seven-minute hook up. All the while, the popular girls have plotted to expose the one girl who was invited as an intended victim. Little do they know that this lonely girl’s psychiatrist is more pathological than the average head shrink, and he intends to enact some victimization himself. Lucky for the teens, Batman gets involved in “Dark Knight of the Scarecrow”.

Joker’s Asylum: Two-Face
Written by David Hine
Art & cover by Andy Clarke
A facially disfigured man tries to peer-counsel Harvey Dent in “Two-Face, Too”. Dent will have none of it and decides to show the man that despite their injuries, their situations, their backgrounds, their pain is not the same … yet. The man is forced to choose between his soul and his wife: Murder the Batman, who is hanging and helpless, or his wife will experience an acid drip to the face. The man chooses poorly and his life is never the same.


REVIEW
The first installments of Joker’s Asylum are spectacular in presentation, beautiful in art and story. THE JOKER is unbelievably creepy, dirty, and scratchy. His desire is a simple one: To expose the world for what it is, to create chaos because he can, because he loves to, because he needs us to burn our blinds and see the world as he experiences it – Decadent, devious, and depraved.

PENGUIN is horrific in its plausibility; many a teen boy has been the object of cruel jokes, or the bug beneath the crushing Mary Jane of a beautiful but insensitive girl. To have the two occur together is unforgivable and the pain Oswald feels runs off the page and bleeds onto the floor. His puppy dog eyes, the sadness at his realization that he has not found love or acceptance is nearly too much to bear. Allison’s hag-face is enough to want revenge of our own. When Oswald does find acceptance and love later in life, we cheer him despite his super villain status. We hope, somehow, her love will be enough to turn him. Alas, that never works. The sorrow is not only hers but ours as well, as we watch our heroic super villain, the one we dared care for, follow his infamous path.

Not the traditional horror comic, I suppose, but the first two installments in this 5-part series are creepy enough for any sane person. After all, humanizing and understanding the villain can be the most disturbing experience. Pain, suffering and revenge are very real, indeed. Perhaps too real?

The other three issues – POISON IVY, SCARECROW, and TWO-FACE – are fine yarns, but the power and poignancy is not as strong or overpowering in the latter issues as it was with THE JOKER and PENGUIN.

As with many pieces of literature, this would not be appropriate for all classes. But for the class that wishes to study psychology, crime, terrorism, and personal responsibility, THE JOKER and PENGUIN, especially, could be excellent resources.


BE AWARE
There is a small amount of profanity, more prevalent in the latter three issues. A single “damn” is the only curse word to grace the pages of THE JOKER, and PENGUIN has none. These are not meant for children. They are dark stories. In PENGUIN, the Joker is sitting in his cell ready to impart a new story on the reader when Two-Face, from the next cell, interrupts. The Joker says to him: “Harvey, I will chew your eyeballs into jelly if you don’t mind your own damn business.” Not for kids, but very funny and telling.

POISON IVY, SCARECROW, and TWO-FACE have more profanity as well as sexual content, including partial nudity and sexual games.


IN THE CLASSROOM
Evil – pure, unadulterated evil – is the topic at hand these days and the exploration of evil and the circumstances that are involved in the paths chosen are significant. Our choices, our ability to cope with problems, are a significant problem for teachers, as we try to instill personal responsibility in our students. While we do not have any real life Penguins or Jokers, we do have real terrorists, flesh and blood psychopaths that seek the destruction of certain peoples or groups, cultures or religions. Sometimes it is to promote one idea over another and for others it is because they can. Either way, the stories, albeit inside the superhero genre, are apropos for the modern day student living after 9/11.

Studying psychology, understanding the mind and the soul, prepares us to make good decisions, appropriate choices, in our own lives and helps us to learn to cope with the challenges and nasty nature of life.

I found THE JOKER and PENGUIN to be outstanding pieces of comic literature, activating my emotions and trapping me inside the stories. The other three were not as successful and had more objectionable content.

Email ThisBlogThis!Share to TwitterShare to FacebookShare to Pinterest
Labels: Highly Recommended, Not Recommended