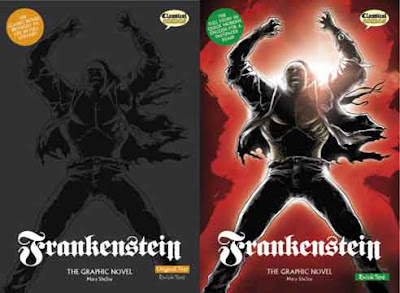 
When I was young and matriculating, I was told by my 19th Century British literature professor that if I ever mistook Dr. Frankenstein for his Creature (never, ever ever Monster) I could expect to find myself looking to get a law degree because English would not have me. I spent the entire semester in mortal fear that I would inadvertently blurt out Frankensteen, Franekensteen!

So, when the good folks at Classical Comics decided not only to create a "Quick Text" version of FRANKENSTEIN but also an "Original Text" version, I was worried. I imagined that somewhere – in a dusty garret no doubt – my old Brit lit teacher was gnashing his teeth and bellowing into the dark, moonless night.

Still, I think Dr. Oberon shouldn't worry. FRANKENSTEIN (for those of you who only know the Abbot and Costello version or the old SNL Tarzan, Tonto, and Frankenstein versions) recounts the story of Mad Scientist (those fools at the Royal Society will rue the day! rue the day!) Victor Frankenstein as he cobbles together a misshapen Creature out of various freshly buried body parts and a dash of well-placed lightning. Things go badly. The Creature turns out ugly and with a predisposition to rip things limb from limb (though he talks like Lord Byron on steroids) and threatens Victor's girlfriend if he doesn't make him a girlfriend. Dr. Frankenstein, on the other hand, spends a lot of time moping and contemplating the morality of playing God.

FRANKENSTEIN is one of those rare great canon works that have the potential to hook teenage boys; the seesawing between mordant philosophizing and bloody violence offers them a rare bridge between violent fantasy and powerful literature. It's particularly surprising that the Victorian never-a-sentence-when-a-paragraph-would-do style translates so well to the graphic novel format. At first, I expected to see a dinky picture of Frankenstein staring off into space while several baroque paragraphs crowded down the side of the page, but in fact the picture-to-word ratio seems pretty reasonable. The abridged graphic novel adaptation strikes an effective balance between provocative art and well-rendered text. Something I would not have thought possible until I saw it.


ART REVIEW
It takes a few panels to get used to the art style. Declan Shalvey's style is undoubtedly gothic and more than a little reminiscent of superhero comic books. The Creature sports a wild mohawk and the text is highlighted with several Keblams! and Crrracks! The page is broken up with more or less typical panel breaks, but there is enough variance to give the story movement. Because it is a melodrama and a gothic horror story, the arching skeletons dripping with worms feel appropriately creepy. 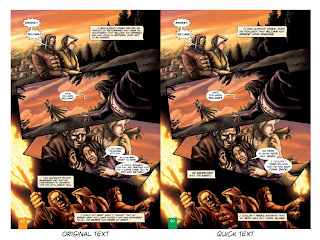 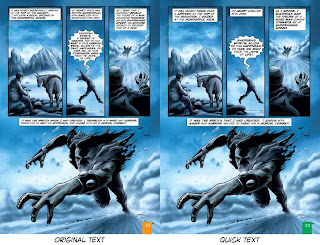 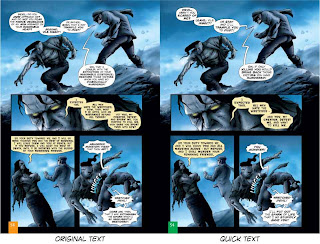 HOW A TEACHER MIGHT USE THIS
These graphic novels are clearly produced with teenagers in mind. The Original Text version gives teachers the option of providing students with clear visual aids in understanding the sometimes intricate storyline and frequent digressions. There is even a back section that details how the Frankenstein story grew from Mary Shelley's Can-you-Top-this horror story-athon with Percy Shelley and Lord Byron to inducing Kenneth Branagh to run around with his shirt off, screaming "It's alive! It's alive!"

I'd love to see educational research that tackles whether these types of books result in increased reading comprehension; I suspect it does, but I'd like to know. In an ideal classroom, a full set of these for a British literature teacher would leave many of my colleagues weeping with happiness. Even the Quick Text version could be a welcome addition as it introduces the classic story to students in an even more digestible form.

Though, I worry sometimes that students might suffer from Baz Luhrman disease. When I show the Australian director's version of Romeo and Juliet, I always expect students to appreciate the updated guns for swords milieu, but often they are irritated that a movie that seems so clearly made for them is forcing them to decode Shakespearean English. Why can't they talk normal and make this into a "real" movie instead of an educational one? Some students want there to be a bright line between that which is entertainment and that which is school. It might take a pretty skillful teacher to convince a skeptical classroom that literature – which is so relentlessly grouped with such good-for-you standbys as broccoli, flossing, and early morning jogging – can be both.

A brit Lit prof named Dr. Oberon - really!? I think I might pick up the CC Frankenstein. They're winning me over by content alone: they just sent me Jane Eyre (which, actually, my review is probably going to be a carbon copy of Dorian Gray in terms of pros and cons). I want Moby Dick. THE DEMON FISH.