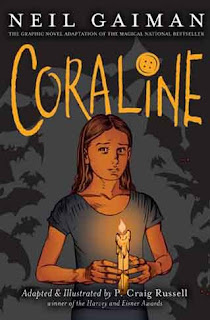 STORY SYNOPSIS
Coraline, that is C-O-R-A-line not C-A-R-O-line, moves to a new but bizarre home so big that it has been turned into multiple flats. The other tenants are strange, but the weird factor doubles when Coraline finds the odd locked door that appears to be bricked up.

Once she gets through the door she finds herself in a new world, very similar to her own home environment, with one buttoned-up exception. The new parents she finds in the other world have been waiting for her and are very reluctant to let her return to her original home. It takes clever and cunning to solve her problem.


REVIEW
The story is mysterious and a tad on the scary side, what with the buttons-as-eyes, bizzaro-world parental units, and red-eyed rats. The illustrations of those people is disconcerting to say the least, and is representative of the rest of the art – muted colors and a unnerving calmness that keeps the reader creeped out throughout.

In what I assume is an attempt to maintain the essence and voice of the original text, Russell’s adaptation is a bit too heavy on the obvious and unnecessary narration, telling the reader things that are depicted in the story. On page 36, the narration describes the actions of the rats.

They swarmed up him, burrowing into his pockets, into his shirt, up his trouser legs, down the neck.

This narration is printed directly on top of the picture depicting the same scene, which is rather redundant as we can see the image.

Most of the narration works well to set a tone and a voice for the narrator, wherein the reader can clearly imagine the sound of the voice; there are times when it works well, but in several instances, especially in the first half of the story, it is a bit distracting and maybe overused.

Other than that, the book delivers a story that is calm yet uncomfortable, a world within a world, in which our own parents don’t see so bad after all.

The graphic novel might be a bit much for some younger readers, as visualizing the illustrations adds a lot to the reality of the story.


BE AWARE
This is a spooky scary story.


IN THE CLASSROOM
As always, having original prose and a comic adaptation can make for leveled readings, and interesting compare-and-contrast evaluations.


CHRIS’ RECOMMENDATION:
Recommended
Kids love to be creeped out, just ask any librarian and they will tell you the horror books go fast. That makes this a nice edition for any classroom. It is free from blood, guts, cursing, monsters, and magic, making it more suitable for some.